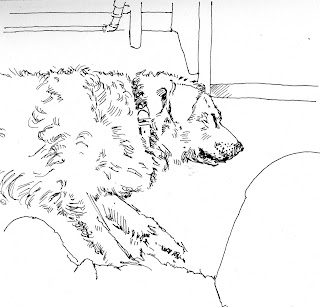 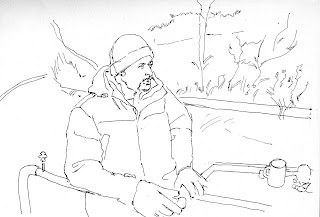 This weekend we took the boat up to Paddington for the weekend. The bottom sketch shows D looking like an intrepid explorer in his new super-warm coat (you need one to drive a narrowboat). We were surprised to find when we got there that many other narrowboaters had had the same idea and Paddington basin was quite crowded. We decided to go to Leicester Square and see a film, and having done very little research on the latest offerings, plumped for one called 'Easy Virtue' - not really D's sort of film but enjoyable nonetheless - then came back to Paddington and had a great Chinese meal. Next day were going to take the dogs to Hyde Park but the weather was bad - not Molly's cup of tea - so decided to return home. D got soaking wet in the rain on the way back but we both agreed we had really enjoyed ourselves. The top pic shows Chester - exhausted after the stress of travelling!
Posted by Angie at 09:02

These are great sketches. Sleeping dogs are so endearing :)

Great sketches of your weekend out. Guess winter is really coming and out come the jackets.