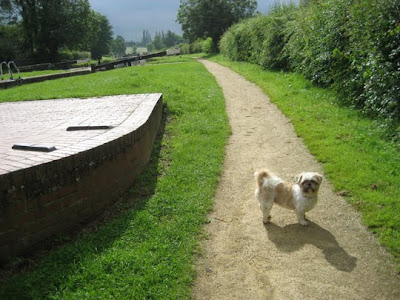 From the 9th of July we stayed in Hillmorton on the outskirts of Rugby. It's a quiet suburb (it used to be a village in its own right, and is mentioned in the Domesday Book) seemingly populated by older people. There don't seem to be any decent pubs, but there is one shop. A man called Roy told us where to find the shop. He told us he had been living here for 44 years. We went into Rugby on 2 occasions. The first time we waited at a bus stop with a Geordie man who was very helpful and told us where to get off the bus, and once we were in Rugby he escorted us all the way to Asda. People are very friendly here. Rugby is not an unpleasant town, but there's nothing about it that would blow you away. It has all the required shops, and a small market. Hillmorton has a field full of radio masts which have been there since 1926 and were used for communications during the war. In our first week we stayed near the beginning of a flight of 3 locks and spent some time observing people going through them on their boats. This helped while away the time for Dale, who got a bit bored. I was expecting work to come in that week, but in the end none came. On Monday 16th July we made a second foray into Rugby. We got to the bus stop and started talking to an old man waiting there. He moved to Hillmorton in 1960 from Durham and worked with agricultural machinery. It was pouring with rain that day, and while we were talking a large vehicle carrying an enormous load of staw was fighting to keep the bales on his lorry. Several other elderly people joined us at the bus stop and we all chatted, moaning about the rain and the lateness of the bus. When we got on the bus it was full of old ladies and all you could hear was loud chattering! We got our stuff in Rugby and on the way back on the bus we met our Durham friend again, and we walked back together to his road and then said goodbye. In our second week we moved on through the locks and stayed beyond them. There were some other liveaboards staying there - the boat behind us was occupied by Dave and Hayley and their dog Tasha. They asked me to paint a picture of Tasha so I took a photo of her. Another of the boats was called the '70s boat', and was painted with pictures illustrating different facets of that decade. We left Hillmorton on Saturday 21st July and travelled on to a big Tescos in Rugby which is near the canal, and got the shopping for the coming week. After that we went on to Newbold on Avon, a suburb the other side of Rugby where we intended to stay for the next two weeks while I was busy with work. Newbold is nice, it has moorings that attract a large number of holidaying and liveaboard boaters, it has a fantastic Co-op and a nice old fashioned pub, The Barley Mow.
Posted by Angie at 06:58

It all sounds so lovely to me. Enjoy your time in Newbold. :)

Thank you Serena, yes it is lovely.

I have come to realise it isn't just you live on a boat instead of in a house. It's that you have a whole totally different life style. For instance, it seems that when you are hungry you find a little shop or a supermarket and buy what you need for that day. No stockpiling of food! And your surroundings change all the time. It must be quite some experience. Thanks for the diaries. I really enjoy them. Your painting of the little brown dog is superb too.