Sunday 19th August It was a bit drizzly again this morning when we set off. We were stuck aground and took a little while to get going but eventually managed to get free. We travelled the short distance to Fradley junction which is very nice and quite 'canal touristy' with a nice pub called the Swan (it was too early to go in) and gift shop, tea shop etc. We turned left at Fradley Junction onto the Trent and Mersey canal. There were 2 locks to get through. A volunteer lock keeper was helping at the first one. He commented on our 'garden' which now consists of 2 large tomato plants and 2 large displays of petunias and marigolds and a herb garden, which have blossomed in spite of me being not that green-fingered. He told me about his potato plants, which have yielded a poor crop this year. He lives in Cannock, and commutes quite a long way to Fradley junction to volunteer. He gets paid expenses but thinks even this may be taxable! He is a retired teacher. At the next lock there was another casual volunteer who has to look after his 100-year-old mother so can't commit himself properly to volunteering. He lives near his mother in Birmingham, but used to live in Harlech in Wales. He tried to talk to me about cricket but I'm afraid I didn't know what he was talking about. The weather was a popular subject with everyone we spoke to today as well, it's very changeable at the moment. I think they're having it very good in London - apparently there's a heatwave. We travelled on through a wooded area - there was one more lock, and luckily someone was coming through the other way which filled the lock for us so we helped them through. The woman who was driving said it had been a very relaxing day for her and said that narrowboating is not as relaxing as everyone thinks. This is very true, it can be quite stressful at times. We continued through the towns of Handsacre which we thought would be a nice little village but in fact is not that picturesque. and Armitage (home of Armitage Shanks the toilet company). We went past the factory with all the toilets packed up outside. Armitage is even less picturesque than Handsacre, so we decided to carry on and stop in Rugeley, the start of which seems quite nice, with the large Hawkesyard Priory and Spode House (former home of the pottery family), dominating the canalside, and the estate consisting of large landscaped gardens and a golf course. We walked up the towpath to see what else we could see and came to the Ash Tree pub by the canal – a family restaurant/pub. We had a couple of drinks in there and decided to catch the bus to go food shopping in the centre of Rugely the next day. 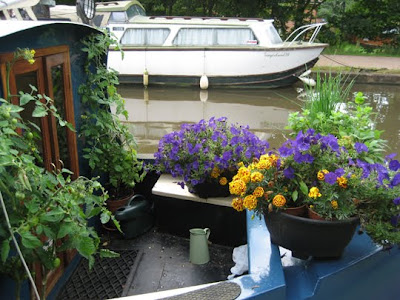 Your deck garden looks so pretty! Another interesting day...you'll be heading into winter soon, won't you?

Thanks Serena, I'm glad someone is reading my blog!
Yes, winter is approaching much too quickly - we're already trying to plan where we are going to stop as it can become difficult to travel if the canal ices up or locks are out of order!