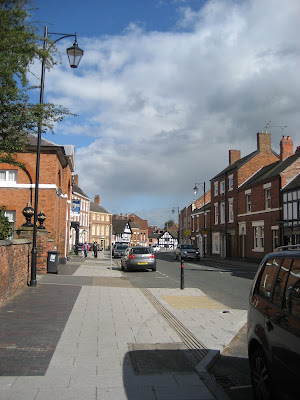 Nantwich Monday 10th September I had to work so we stayed in Barbridge Monday and Tuesday morning then on Tuesday afternoon moved on to Nantwich. We were very impressed with this smart and interesting little town - we only had a short time there but thought it was the best town we'd visited so far - there are some amazing old buildings there. We carried on after doing a bit of shopping and moored up after the 2 locks at Hack Green near the secret nuclear bunker which is open to visitors. We wished we had time to see it. On Wednesday we had 4 locks to go through and then we were in Audlem a small but pretty village with 4 pubs - one of them being the Shroppie Fly which we visited in the afternoon but it was a bit empty. On Thursday morning we left at 9am to go through the Audlem flight of 11 locks - we got into a bit of a rhythm with working the locks but there was someone behind us catching up more and more, so we felt a bit under pressure to hurry. We stopped for lunch at Adderley before the 5 Adderley locks then decided to carry on and get to Market Drayton, which was our destination for a couple of weeks, as soon as possible. Going through the 5 locks was made easier by a kind man ahead of us who after he had gone through himself, emptied the locks for us. We were really looking forward to getting to Market Drayton, a town in Shropshire, as we had heard lots of good things about it and the it's described in our map book as an 'attractive town with some splendid old buildings'.
Posted by Angie at 05:58

OH, what an interesting life you lead visiting villages along the way. I can just imagine you going through the locks and how lovely of that gentleman to empty them for you.