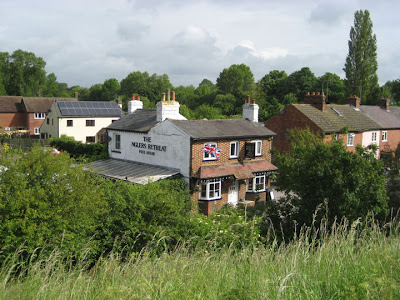 Thursday evening at the Anglers Retreat was eventful. Rosie the parrot cottoned on to Dale's laugh and performed it whenever she felt he wasn't paying her enough attention. A man came in and on tasting his beer, started wretching and ran outside to be sick. (This is no reflection on the quality of beer, ours was fine). When we got back to the boat, it was leaning heavily to one side and all night long Dale was trying to stop himself from falling out of bed. 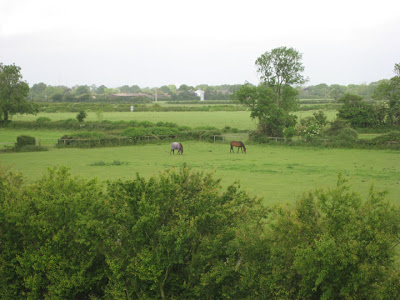 On Friday we took Molly for a last walk around Tring reservoir. I did some work then at about 12.45 we set off. It was blowing a gale and raining intermittently. We met an older couple and went through 2 locks with them. They were hoping to get to Crick and were in quite a hurry. They moor at Cowroast but want to move to Crick as they can't travel anywhere from Cowroast because of the water levels. The lady was nice but the husband was grumpy. Got to Pitstone about 3pm. There was supposed to be a pub there called The Duke of Wellington according to our map but a man told us it had just closed down. The nearest pub was the Old Swan at Cheddington, a mile in the other direction. We asked him where the nearest shop was and he said he was going that way to pick up his daughter so he gave us a lift! We stayed in tonight because Cheddington is too far. Had scrambled egg on toast, Dale watched football and I read my book. On Saturday we got up about 8.45 am. Windy again. We walked to Cheddington to get some provisions because there is no shop in Slapton where we are heading. On the way to the shop which was miles from anywhere as usual, we passed the Old Swan. It looked nice and we wished we had visited it the night before. Got back to the boat, had a cup of tea and set off about 11am. The wind was horrendous. We did a swing bridge then met up with a couple and went through the 6 locks with them. It was a pleasant journey, they were very efficient and nice people. They had been boating for 28 years, their name was Wood and they moored at Yardley Gobion. That's where they were going. Got to Slapton about 2pm, had a little rest then walked to the village to do a recce on the pub which had been highly praised in our map book. Unfortunately the Carpenters Arms was a disappointment. It was empty and forlorn except for 2 young men sitting next to each other staring at what I thought must be a TV but turned out to be a wall, a barmaid, and a man trying to chat her up. The furniture was modern and out of place in the very old building. Although the village was pretty and surrounded by gorgeous countryside, it all seemed a bit lifeless. We got back to the boat in the afternoon and had a little sleep. Got up about 7pm, had cheese omelette and beans and watched Poirot on TV. 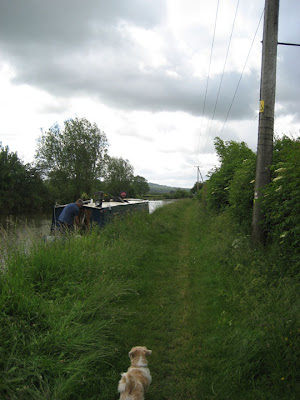 On Sunday (today) we took Molly for a walk to the lock. Then got going – it's still a bit windy today but brighter. Had to go through 3 locks to get to Leighton Buzzard. I tried to drive into one of them - total disaster! Met a man travelling single handed – he told us the best place to stop in Leighton Buzzard. Met another man who came from Slapton and had had a heart attack. We told him we were disappointed with the Carpenters Arms and he said it had just been taken over by someone from London who had modernised it. He said he'd tell him we were disappointed. Got to Leighton Buzzard and stopped where the man had told us and walked into the town – a pleasant and quiet market town. Went to Waitrose to get food then went to the Golden Bell for a couple of drinks – a bit rough and full of locals but lots of people laughing and we quite liked it.
Posted by Angie at 09:22

Really enjoyed reading this Annie - it's a different life you live on the boat. I do like the idea of freedom and movement because I love travelling which I suppose is my equivalent. I like the space a house gives but I suppose there is something of an "imprisoning" factor to it.

Hi again Annie. Would you email me please about my current painting project which I'd love you to be involved in if poss. I have lost your email address and it doesn't seem to be on the blog anywhere.