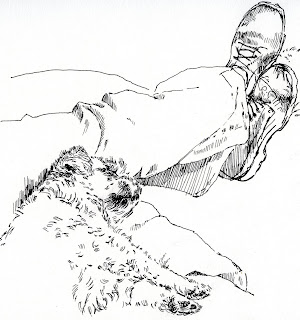 Last summer D found a baby rabbit who had been dumped in a box in the alleyway. We adopted him, he is now called 'Binky', which we discovered was a word used in the rabbit world to describe the mad running and jumping that rabbits sometimes do, and which he does a lot. Recently because of the cold we have kept his hutch in the back of the boat and let him run around a bit in the boat. Molly at first chased him everywhere, pushing him with her paws when he sat still because she wanted him to move and driving him to hide under the settee. Now he is a bit older and hormones are kicking in the tide has turned, because he has suddenly decided Molly is the love of his life and he must jump on her back and attempt to mate with her as often as possible. Now it's her turn to hide from him!
Posted by Angie at 07:21

How funny! There is nothing so exhausted looking as a dog after a lot of exercise. Except maybe me! sweet sketch.

That is a beautiful drawing Annie.

I love seeing your little dog. That's the way my little schnauzer used to spend her time. We lost her Dec 3 because of disc problems. They are so precious. I had to laugh at her hiding from the rabbit.

If you need motivation with things to draw/sketch, visit Wetcanvas and join us in the Scavenger Hunt. New list every 9 days. You "find", draw/sketch as many as you have time for, upload them to share. Many nice people sharing drawing in there.

If you aren't a member of Wetcanvas, it is free to sign up.

Wonderful sketch and such a cute story. Animals just crack me up! I can't wait to get home to my scruffy little dog. I will have to get used to drawing long hair after all these short-haired Bali dogs.

Thanks for your comments everybody. I'm sorry about your dog Jeanne, and thanks for the link - I will certainly look up the Scavenger Hunt.

Thanks for your comments everybody. I'm sorry about your dog Jeanne, and thanks for the link - I am a member of Wetcanvas, and will certainly look up the Scavenger Hunt.